It's that magical time of year when I actually play video games. I have one rule for christmas (and bday, for that matter) gifts for Tove: she should buy me toys. No practical gifts, no soft packages with sweaters or socks. I didn't enjoy them when I was little, and I don't enjoy them now. I refuse to grow up.

And none of that "toys for men" crap either. I couldn't care less about a new miter saw or something like that. I'll buy manly toys myself if I have some project in the yard that needs them, I don't want them as a present. The week after christmas is when I regress to my teenage years, and play games, build models, or play with RC cars.

In other words, I want presents that I wouldn't really ever buy myself.

But since I usually do it for just about a week each year, I really suck at it. So this year the suckage involved me playing the new Prince of Persia (christmas), and flying around a small electric indoor RC micro-helicopter (birthday).

In PoP, I'm actually pretty good at the acrobatics (I like the platforming part, and I've played all the versions of PoP over the years), but the fights are really frustrating. You're supposed to be able to create those wondrous fight sequences with the right button combinations. I can't do it, so I just flail wildly around, mashing the buttons as best I can, and eventually I wear the opponent down. I'm pretty certain some of the bosses just decided that suicide was better than watching me jump around and hit things at random. Or maybe I just embarrassed them to death. But as long as they die, I don't care.

And Ubisoft must have known that no normal person actually ever gets any of those magic 14-hit combos, and I could finish the game in just over two days. Some people may complain that it's too short a game, but for me, that was just perfect. Last years game was Assassin's Creed, and the thing was just too long - I got pretty good at killing guards, and it was all beautiful, but it just took me too long. So I eventually just left it with the last long assassination sequence not even started.

As to my mad skillz at flying RC helicopters, I have yet to ever succeed in actually landing the damn thing in a designated spot, unless "on the floor, possibly with a crunch that sounds like the helicopter barely avoided becoming scrap" counts as such. And I probably never will.

But hey, it's all good. It's what christmas is all about. Killing people and crashing helicopters? Isn't it? Even if you're not very good at it.
Posted by Linus at 3:14 PM 74 comments: 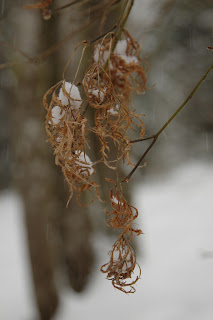 It looks like we may well have a white Christmas in Portland this year. Schools were closed all week long, and while it's easy to laugh at that when you come from Finland ("if it's colder than -20°C, you don't have to go outside for recess, and can do PE inside"), it's rather understandable when most years you only get a day or two of snow.

Here's a plant in our back yard. But don't ask me what it is. I strictly sort plants by "edible" and "not edible", and I think this one falls in the second category.

And I find I like snow when I know it's not going to stay much longer, and it only happens once a year or so.
Posted by Linus at 3:14 PM 103 comments:

Two books this week: "Survival of the Sickest" by Sharon Moalem, and "The Hero of Ages", the final part of Brandon Sanderson's Mistborn trilogy.

The first one is a fairly light read on disease and genetics, and was really quite enjoyable. It's the kind of book I tend to read when I decide I want to read something intelligent, and it's a lot more modern about genetics in that it discusses genes as being much more dynamic than you'd find in more traditional ("older") books on the subject.

It's a bit unorthodox in other areas too. I like the aquatic ape hypothesis that the book brings up as much as anybody, but I guess that's not very mainstream. But whether mainstream or not, the book is a very enjoyable read and definitely merits reading.

As to Hero of Ages, I'm happy to finish the trilogy. It was a worthy finish, and I like Sanderson (both in Mistborn and in Elantris).

My only real complaint is that I just hate being forced to buy hard-cover books - they take up too much space in our already cramped bookshelves, but more importantly they're also much harder to read. I like reading lying on my back, and since I don't do any sports my muscles have atrophied to the point where holding up a hard-cover book for hours counts as more exercise than I really consider enjoyable.

(I keed, I keed. I can bench-press a hardcover book all day long. But it's true that they're less convenient)

So if you haven't already been suckered into the Mistborn trilogy, I'd suggest holding off until you can find it as mass-market paperbacks. I didn't have that choice - as usual, I had made the mistake of starting the series too early, and I'm not big on the whole "delayed gratification" thing. Which is why publishers do that whole hard-cover thing, of course.

But maybe you like hardcover books. Some people seem to think that it's a status sign. I'd personally much prefer that publishers just came out with a (more expensive, by all means) paperback initial printing, but I guess I'm odd. I pay for the words, not for the bulk.
Posted by Linus at 7:28 PM 69 comments:

Nobody will ever claim that I have any real taste in music. I mainly listen while driving, and mostly just to classic rock. Sue me.

But every once in a while I get that "stabby feeling", and yesterday I realized why. It's "Brandi (You're a fine girl)". It's one of those songs that make me change stations really quickly, even to the insipid nasty soft-rock channel that Tove listens to (which does only christmas songs this time of year - a nice improvement over their normal fare).

I'm sure that song explains at least half the road-rage incidents out there. A less stable person would quite reasonably decide that rather than change the channel, they just need to stab somebody in the face.

I realize that there are probably people out there that view that song with nostalgia, but please: before you request that song, think of the consequences.

...because it looks like we figured out what the suspend/resume problem was. And as suspected, the actual resource code had nothing what-so-ever to do with it, and was apparently just a trigger for timing.

It's frustrating with bugs like that, but on the other hand it's then a big relief when it gets resolved, and in this case we also ended up going through a lot of code and I think we'll be much better off as a result. It's also a huge relief to find the actual root cause, rather than seeing things that can be used to paper over and hide the problem.

And kudos to the people who actually saw the problem (Rafael and Frans), and who spent a lot of time trying out different things and sending out logs and looking at the resource allocation. The real clue was in a log from a successful suspend/resume cycle that showed some questionable behaviour despite not actually failing.
Posted by Linus at 9:41 AM 85 comments:

So I've spent much of the last couple of days remotely debugging this insane suspend failure (or to be exact, resume failure) that happens occasionally for a couple of people.

Now, suspend/resume debugging is some of the nastiest crud around, because when you suspend a machine, you end up (obviously) having to turn all the devices off. And guess what? That also means that you have no way to then inform the user about what is going on when things go wrong, because all those nice devices (like the screen - duh) will not be available. So no screen output, no serial console traces, no network dumps, no nothing.

To make matters worse, we even know how to trigger the problem (on those particular machines, neither of which are mine), but the particular PCI resource layout that is needed seems to have nothing what-so-ever to do with the actual failure itself. It seems to be just a way to trigger it, nothing more.

(And that's also why I've been debugging it personally - the whole resource allocation thing is one of the areas where very few other people know how things work. Most of the time I can try to prod others into looking at the bugs, but in this case it was one of those rare "Linus or nobody" choices).

So I'm frustrated. I'm doubly frustrated because it's a reasonably recent Intel chipset, and some simple debugging facilities is the one thing I've been asking Intel to add to the core chipset for the last several years so that we could do some kind of sane tracing over complete failures where all other devices are unavailable and you have to power off the machine to get it back.