This may be a shock to everybody, but I have to admit that I'm not generally a huge fan of most Microsoft software ("No, really, Linus? Tell us more!").

But I may have to admit that I was wrong.

No, I'm not talking about Windows 7. I'm talking about Songsmith, which is clearly a true work of genius. Yes, yes, the commercials are painfully cheesy, but when used right the end result is undeniably art.

The thing that convinced me was hearing Billy Idol's "White Wedding" as re-interpreted through Songsmith. Nobody will ever convince me that that isn't just impossibly brilliant. Sheer genius on just an incredible scale. I'm getting carpal tunnel syndrome from just clicking "Replay" over and over again. 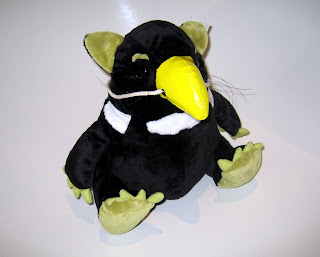 It's sitting in a bathtub, because my innate instinct for great photography (Ansel Adams has got nothing on me) made me think that "Hey, I'm in a hotel room in Hobart - and it's exactly like I was in a fancy photography studio if I just put the dang thing into the bath tub".

Very fetching. I think I really "captured" it. Whoever had the idea of dressing up a plush tasmanian devil as the Linux penguin deserves some kind of medal. And the beak only slightly makes me think "snoopy doing his vulture impersonation". Otherwise it's a dead-on penguin.

I'm totally not very sentimental about technology - the good old days really weren't very good at all, and I'm solidly in the "good riddance" camp when it comes to old computers and peripherals. I'll take the newest/smallest/fastest thing over those clunky machines of yesteryear.

As a result, when somebody sends me an email saying that the Sinclair QL turned 25 years old yesterday, and that I should mention it on my blog, I just went "hmm". Because while I had one and loved it, I have to say that I was so much happier with the PC I ended up replacing it with, and decided that I'll never use an odd-ball machine ever again.

(A promise I then broke several times, since I ended up playing with both alpha and PowerPC in my efforts to make sure that Linux wasn't too PC-centric. Oh well. Each time I ended up re-promising myself never to do that, and each experience just convinced me more that hardware that isn't mass market tends to not be worth it in the long run. But it can certainly be fun and interesting and a teaching experience).

But the email from Urs König (aka cowo) did end up festering in my mind and brought back fond memories. So here we are, twenty five years and one day later, and I'm writing a shout-out to the QL anyway. It was odd, and it was flaky to the point of being the only machine I had to do hardware surgery on to make stable and useful, but I guess I was at an impressionable age. And while I don't think there were many QL's that ever made it outside Britain, it was an interesting machine for its time.