Kudos to a new writer for a good debut trilogy, but also extra kudos for releasing a trilogy all at once and having a clean ending and not leaving things hanging just for the future. I guess the two are related (publisher not wanting to publish something from a new author without having the whole series in hand and being able to judge it), but I hate reading an interesting first novel in a series and then having to wait for the rest (hint: "Name of the Wind". Grrr).

Ok, so technically the books were released a month apart, and I also guess that I was lucky that the third one was apparently available a few days early at the Ka'anapali Barnes & Noble, but that's still "together" as far as I'm concerned.

So I was in Maui the last week, doing my best to spend as much time under-water as possible, given the constraint that I also had to at least occasionally meet up with my family for dinners etc.

And I got in a solid lucky thirteen tanks, with the added bonus that I don't think I had a single dive where I came up with less than 1200psi. Which means that I'm definitely no longer the person that forces other divers to come up early due to being low on air. Woot!

So I was being good and sporty all week, but despite that, roughly half-way through the trip, I noticed that I had a much easier time fitting in the ML (male large) suit than the MM (male medium) ones.

And it wasn't just one of them that had shrunk - I checked a couple just to be sure. The suits that were a perfectly good fit on Saturday had suddenly shrunk and become tight by Wednesday. 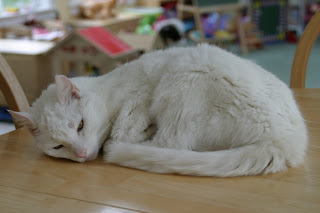 It's been about two years now since Randi walked away and never came back.

He was 17+ years old, and his kidneys were failing. He often woke us up (and probably the neighbours too) by being fairly loud about something in the night. But he was a good cat, and I'm surprised at how sad this post made me.
Posted by Linus at 4:38 PM 132 comments:

Book of the day: "Six Impossible Things Before Breakfast" by Lewis Wolpert.

Ok, I really wanted to like it, since the subject matter is interesting. But in the end, I think it was too light on the science. The most interesting parts were when Wolpert talks about human mental development or about the various odd belief systems of tribes, but both of those were really not very deep. They were there to explain the arguments, nothing more.

End result: it didn't really grab me. It wasn't bad, but it also wasn't terribly intriguing.

It may be the same thing as with Dawkins - I really found his scientific books more interesting than the one about belief. I'll take his old "Selfish Gene" any day over "The God Delusion".

On another angle entirely, I read 'Warrior' and 'Witch' by Marie Brennan. I find myself looking at literature that I think Patricia might enjoy - so I'm looking at women protagonists. She loved the Twilight series, for example. I just want to read it first myself, because some of the female-oriented stuff really does seem to be sometimes closer to soft-porn rather than anything I'd suggest to a pre-teen girl.

Oh, and the girls are giggling over "Little Big Planet". Maybe trying to find books for them was a waste of time ;)
Posted by Linus at 8:53 PM 78 comments:

I dunno about you guys, but I'm all for giving nature a bit of help. I've had lasik, for example, and am very happy with it.

Not that I actually ever really minded wearing glasses, but I could not recognize my own kids when in a swimming pool and they were more than six feet away. And let's face it. swimming after other peoples kids and tickling them is not socially acceptable. At least in the US.

Which brings me to the other little help I'd like to give nature: I have never found a sport that I find in the least interesting. Sure, I play pool and snooker, and it's technically a sport, I guess. After all, you do move a ball around. And scuba-diving is lovely, but I think that if you see it as an aerobic exercise, you're doing something wrong (the best part of scuba diving is the floating and looking around - very much avoiding exercise).

So let's face it, I sit around like a vegetable 99% of the time. My job is sitting in front of a computer, and when I relax, the last thing I want to do is run around. I used to swim a while, and for half a year or so I actually spent about 45 minutes in the pool almost every day, and it helped, but while I enjoy swimming, at some point it just became counting laps.

So then I lapsed (I kill myself - I'll be here all week), and didn't get back in the habit, and now while there's a pool nearby, parking is inconvenient and I just can't be bothered. I've tried things you can do at home (jump-rope? I actually enjoy it, but not enough to do it. Air pistol? Doesn't really do that whole "body sculpting" thing - you can do it sitting down and eating cheetos. Everything else? Totally horrible).

So I eat fairly healthy instead. It works. I have enough self-control (and genes - I'm convinced it's largely genetic) to keep from looking like "the blob" from the movie, and I happily like most healthy food. But the exercise nuts just irritate me.

So today google news had another cluster about new reports about SRT1720 (short version: it kicks up your metabolism and makes you burn fat without that stupid and boring exercise. At least if you're a mouse. And it probably will work the same way in humans, because the pathways are all the same).

And just about every single damn article about it had that annoying "Eat healthy and exercise" note.

I want to kick the next person who says that in the nuts. And I'll call that my exercise for the day (or, to be honest, for the week).

Sure, some people apparently get a runners high and really enjoy exercise, and they'll say how much people like me are "missing". My dad is apparently one of those freaks, as is my wife. I'm not. I have never in my life felt like exercise has made me feel that way. I spent eleven months in the Finnish army, and I was probably in the best shape of my life, and all I ever felt was sweaty (and cold. And bored).

So bring on the drugs. If I can kick up my metabolism with a pill, I'll do it in a heartbeat. And the next sanctimonious bastard that talks about all I'm missing can damn well walk away holding his nuts and going "Oww, Oww, oww".

Because I'm not missing anything. 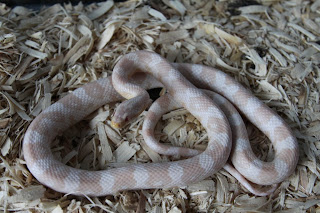 Because he's a frosted corn-flsnake. Geddit?
Posted by Linus at 1:35 PM 63 comments:

So I'm pretty well-known for not exactly being a huge fan of the FSF and Richard Stallman, despite the fact that I obviously love the GPLv2 and use it as the license for all my projects that I care about.

The reason has always been that I don't like single-issue people, nor do I think that people who turn the world into black and white are very nice or ultimately very useful. The fact is, there aren't just two sides to any issue, there's almost always a range or responses, and "it depends" is almost always the right answer in any big question. And not being even willing to see the other side makes for bad decisions.

Don't get me wrong - I love seeing people who are really passionate about what they do, and many people have something they really care about. It's just that when that becomes something exclusionary, it often gets ugly. It's not passion for something, it becomes passion against something else.

This is, just to take an example, one of the reasons I try to avoid talking much about Microsoft - I'm very passionate about Linux (obviously), but quite frankly, I really find the whole notion of Linux as being "against Microsoft" to be silly and wrong-headed. Yeah, I might make an occasional tongue-in-cheek joke or two, but does anybody really seriously think that you can put 17+ years of your life and make good decisions based on hate and fear?

That was also why I didn't (and don't) like GPLv3 - I think many of the changes weren't due to being "pro free software", but more a mindless reaction against things like TiVO, and the whole black-and-white, "good vs evil" mindset.

The reason I bring this up is that while I can't vote, I did want to say publicly anyway that I really really hope that Obama will be the US president elect after Tuesday night. I realize it probably won't come as a big shock to anybody (yes, I'm a socially liberal open source freak from Europe - so what would you expect?), and others will just be angry.

If anybody wants a reason for that, just watch (or listen to) Obama's "Call to Renewal" keynote speech from 2006. It looks like it's split into 5 pieces on youtube - the whole thing is about 40 minutes - but it's worth it, just to hear something rare: mentioning religion in the US without being black-or-white.

It's not a rick-roll, I promise. It's also probably not the best link (the thing must exist somewhere as a single video - it's how I remember seeing it originally), but it's the one I found now.

There are other reasons, but that's the one that originally made me hope Obama would take the democratic nomination. And what he has done since hasn't changed that. He's obviously smart and thoughtful, and he has a very interesting background that makes me believe that he really can see the other side not just when it comes to religion, but when it comes to international issues too.

Of course I'm biased (we all have our quirks), but I think it makes a difference to have actually lived in another culture. I suspect Obama understands the US better because he has seen something else, and has seen it from a wider background. He's not a black and white person - and ironically, that is probably partly exactly because he is a black and white person in a totally different sense.

And this really is about more than just being positive about the issues (as opposed to negative campaigning). It's about having the capability of understanding - and accepting - that others have other motivations than you do, even when you don't share them.

Not that I'm saying that I'm always a great example myself. I get angry and negative, and quite frankly, I have a really hard time understanding and accepting some of the nuts I see out there. But hey - that's why I'm endorsing Barack Obama, not myself, for president.
Posted by Linus at 11:52 AM 313 comments: