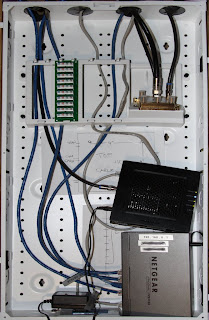 I'm probably moving my office to be above the garage.

In preparation for that, I did the whole "get CAT6 networking to the new location" thing, which has involved re-acquainting myself with our crawlspace. Spending my days crawling around, hoping I'm not going to encounter any dead mice (or live ones, for that matter).

I obviously already had cable going to various locations in the house, but the way that had happened, I'd done them one at a time, and my current office ended up being the hub for it all. And since I really wasn't going to re-route all the cables and make the new office be another hub of chaos, and I certainly wasn't going to leave the hub in what will become a kids bedroom, the above is the result.

Beautiful it ain't. It's a real media center enclosure, but the networking hubs that are meant for those things are overpriced and generally just pitiful 4-port 100Mbps switches with dubious firewall capabilities, so I'm just installing my own. And some day, I'll actually add the screws that hold the boxes where they are supposed to go, rather than just sitting in a pile on top of each other at the bottom of the box.

I haven't had the energy to fix the telephone wiring. As you can see, I now have the header for getting that particular mess sorted out too, but I'm not the person who created that particular "rat king" of cabling under our house in the first place. So I'm not feeling the need quite acutely enough to spend another few hours crawling around straightening out all that wiring. Same goes for TV cabling. You can kind of tell what part of the house wiring I actually care about...
Posted by Linus at 10:01 AM 49 comments:

So I was in Costco waiting for a car tire rotation and check yesterday. Wasting time, I blew three bucks on a slice of pizza and a sundae, and looked around for a place to sit down and pig out. The place was packed, and it was the middle of the day.

So I sat down next to this group of people, and realized that one reason it was busy was that apparently people use the Costco foodcourt as a lunch place. Fair enough. A couple of bucks gets you a long way there.

Sitting there, I can't but help overhear that it's apparently some religious discussion going on. Ok, so it's the local God Squad having their lunch meeting, no biggie. They're apparently talking about Africa, and about life and death decisions etc - at least one of them is a missionary.

And that's when it gets strange. One of them starts to seriously talk about praying demons away, and then after the prayer has driven the demon out of the person, you have to support the person so that the demon doesn't come back. And nobody laughs at him.

Seriously? What year is it again? I'm pretty sure they didn't have Costco foodcourts in the middle ages, but maybe there was some time warping going on.

I broke down and bought a Nexus One last week.

I got the original G1 phone from google when it came out, and I hardly ever used it. Why? I generally hate phones - they are irritating and disturb you as you work or read or whatever - and a cellphone to me is just an opportunity to be irritated wherever you are. Which is not a good thing.

At the same time I love the concept of having a phone that runs Linux, and I've had a number of them over the years (in addition to the G1, I had one of the early China-only Motorola Linux phones) etc. But my hatred of phones ends up resulting in me not really ever using them. The G1, for example, ended up being mostly used for playing Galaga and Solitaire on long flights, since I had almost no reason to carry it with me except when traveling.

But I have to admit, the Nexus One is a winner. I wasn't enthusiastic about buying a phone on the internet sight unseen, but the day it was reported that it finally had the pinch-to-zoom thing enabled, I decided to take the plunge. I've wanted to have a GPS unit for my car anyway, and I thought that google navigation might finally make a phone useful.

And it does. What a difference! I no longer feel like I'm dragging a phone with me "just in case" I would need to get in touch with somebody - now I'm having a useful (and admittedly pretty good-looking) gadget instead. The fact that you can use it as a phone too is kind of secondary.
Posted by Linus at 1:06 PM 130 comments: